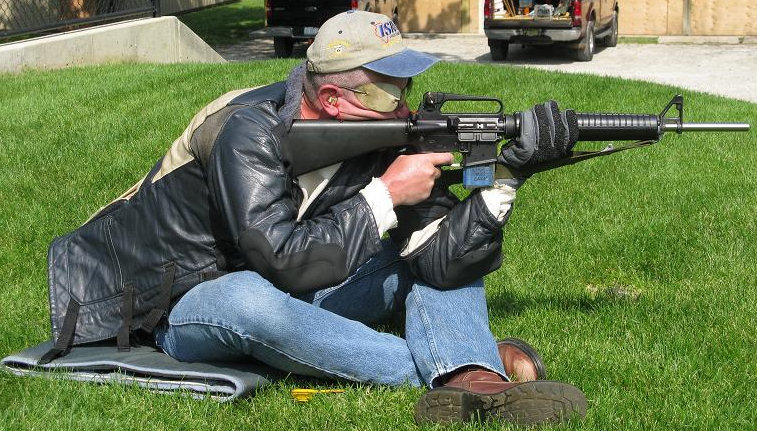 On the same side as the firing hand, bend down on the knee, with the opposite knee in front of the chest. This gives you three ground contact points, as opposed to two points in the standing position. Also, the non-firing elbow can stabilise itself against your thigh. The caveat is: don’t rest the elbow on the kneecap. Or for that matter: any part of the rifle against bony body parts.

Sitting is by far the most stable intermediate position for marksmen. This is best used for cover or concealment when shooting from prone is too high, but not high enough to necessitate kneeling.

In the seated position, place your buttocks and feet on the ground with knees bent to stabilise the body. You can use several variations such as crossed-legged, open-legged or crossed ankles. For this position, the non-firing elbow should rest on the thigh.

Please note that it’s important to avoid bone-on-bone contact in all positions when stabilising the elbows and knees against other body parts. Also avoid bracing the firearm against these bony or rigid surfaces and structures. Recoil will cause a firearm to shift, resulting in skidding or scraping off hard surfaces.

The importance of grip

A good firing hand grip should have a repeatable position that maintains favourable control over the firearm. At the same time, it should allow measured engagement and disengagement of the trigger finger from the trigger guard.

For any grip, ensure that both hands are clear of any firearm moving parts, such as hammers, slides and bolt carriers. Otherwise you could do yourself a slide bite or hammer bite injury.

Also remember to keep hands and body parts clear of a handgun’s cylinder gap. The gap between the barrel, frame and cylinder gives off hot gasses with each shot. And these gasses have the potential to cause burns and severe injury.

As a keen shot, practise kneeling and sitting positions for good marksmanship religiously to improve your skills as a marksman of note.